Welcome to the 7 Seas Fish Market!

We have grown and diversified much over the last 55 years in business, but sticking to the core of our roots is what has made us successful, that is, fresh good quality seafood with great customer service!

The company is made up of our Flagship consumer-based fish market in Kitsilano, Vancouver, our processing and distribution wholesale facility in Richmond, BC, and our offload plant in Homer, Alaska.

We specialize in seafood from the Pacific North West, as well as the Pacific Rim, carrying a massive assortment and variety of seafood. If there is something you want that you don't see, please do let us know and we probably already stock it! Our biggest most popular items are Sockeye Salmon, Halibut, Albacore Tuna, Black Cod (aka Sablefish, groundfish like Local West Coast Snapper varietals (like Ocean Perch, Yellow eye, Red Banded, Rougheye, etc.), along with Pacific Cod, Ling Cod, Live mussels, and so much more! We also import important staples such as fresh ahi tuna from the South Pacific, white and black tiger prawns from Asia, and wild prawns from South America. Fresh scallops from the east coast of USA, and European Branzino! 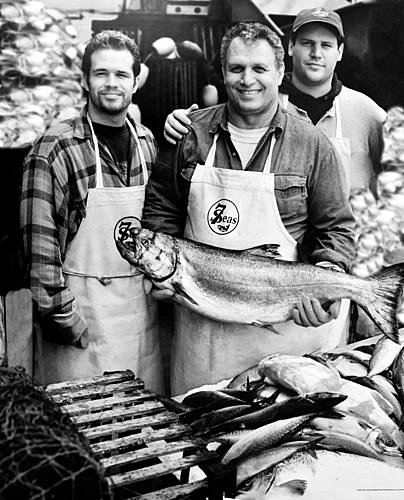 7 Seas Fish Company was founded in 1966 by John Heras, aka Yianni, Big John, Baba (dad in Greek), Papou (grandfather in Greek), Johnny Angel, Yiannikee. The company maintains its Flagship retail market in the heart of Kitsilano, in the original location, of over 55 years. The family is still involved and plays a pivotal role in the business today. John has 5 sons, 7 grandchildren including 5 girls and 2 boys. And Deborah has played a pivotal role in the successes of both John and 7Seas with over 50 years of marriage since eloping in 1969.

George, the oldest son, is the CEO and visionary leader. Starting as a kid ... he remembers sitting on John's lap while he drove around on the forklift.

Mike, the second son, is the head of purchasing and procurement. He deals with many of our partners in collaboration who supply us with the best seafood around the world.

Jamie, the fourth son, . He started working part time at the age of 12 cleaning sockeye salmon on the production line. By 14 he was working in the retail shop in Kitsilano. By 18, he was a trained caviar technician. By 20 he was a delivery driver in the greater Vancouver area. By 24 he was supervising and by 26 he was managing the distribution operation. By 31 he was selling to the finest restaurants in Victoria, Whistler and Vancouver.

Nick, the fifth son, is the fleet manager, and deals with most, if not all, our fishermen partners in collaboration directly on a day to day basis.

John was named after his grandfather Yianni (Greek for John). Yianni was a captain of a fishing boat, and was a beast of a man.

John's father George was a fisherman and a communist rebel. Directly after World War 2, George escaped from the island of Skopelos and stowed away on a ship to Cuba after making his was to Varsailles. The trip could be made into a thrilling movie, it includes a faking of appendicitis, and taking a fake name to when crossing the boarder from USA to Canada, to say the least.

In 1960, John's father afforded to bring the family from Canada to Greece, and John was 19. George had been saving mercilessly by working on fishing boats, and shucking oysters on Vancouver Island.

John started working on his dad’s fishing boat that was contracted from BC Packers and loved it from the beginning. He was a fish buyer and worked long grueling hours.

One day John had noticed that spring salmon fillets were selling at another Vancouver fish shop for about $4.99/lb and knew that they were making good money, especially with the cheap Vancouver property values at the time.

He always wanted to start his own business and in1966 John and with the help of a few friends, was able to pull the strings with the banks to get a loan and opened the doors to our flagship retail store on West 4th Avenue, in the popular Kitsilano neighbourhood of Vancouver. (We're in the same exact location as when we started 55 years ago!)

The store started selling to the public but soon realized that their products were in demand at restaurants too. John also saw opportunity to sell south of the boarder and overseas.

Soon settling in the fishing village of Ladner, known then for fishing and duck hunting at that time. John opened up the Ladner facility on Chisholm Street in ye olde Ladner village in 1974. This facility was approximately 8000 square feet. It included an boat offload facility, a caviar production room, a massive fish cleaning production line with 30+ people working at any given time (also known affectionately as the blood line, just like the inside gut cavity of a sockeye salmon). There was also a smoke house facility where John's Royal Crown Brand smoked sockeye salmon was a popular choice amongst Canadian smoked salmon connoisseurs.

7 Seas also became a global exporter of seafood in the 70's and 80's. Selling 40” container loads - 44,500 lbs (20,185kg) is typical. This included selling full containers of salmon to Greece, all sorts of seafood to USA, loads of sockeye salmon and chum salmon ikura to the Japanese market in Hokkaido. And much much more!

7 Seas also became a global exporter of seafood in the 70's and 80's. Selling 40” container loads - 44,500 lbs (20,185kg) was typical. This included selling full containers of salmon to Greece, all sorts of seafood to USA, and many full container loads of sockeye salmon and chum salmon ikura to the Japanese in Hokkaido. And much much more!

John's eldest son, George, started working in the family business distributing seafood out of the back of the retail shop and saw opportunity with sushi restaurants and fine dining 'white tablecloth'. Foodie-ism wasn't as big as it is now, and cooking TV shows didn't exist yet.

In 1995, the sockeye salmon fishery in the Fraser River collapsed due to a multitude of factors, including mismanagement of the fishery by Department of Fisheries and Oceans (DFO). Luckily for 7 Seas, we had opportunities to sell farmed Atlantic salmon (Salmo salar), from the west coast fish farms that had installed from northern European Multi-National Corporations (MNC) investments.

The late 90's saw an adaption of food and multicultural cuisine start in Vancouver with the advent of sushi restaurants in about 1998.

George was joined by his brother Mike who worked closely with John to learn the inner workings of the production facility and learn the business. John actually started taking summers off in 2000 and heading to Greece to tend his tomato plants.

Having his brothers help out in the business allowed George to explore different avenues of supply chain after 2004, securing seafood imports from at least a dozen different countries, including China, Japan, Philippines, Sri Lanka, Vietnam, Mexico, Argentina, Greece, and of course USA.

The family had sold the Ladner facility and purchased the Richmond plant (from 8000 to 30,000 square feet). November 2009 was 3 weeks of pure haywire during the move.

The family started to fill their boots with bringing this 1970's retrofit to capacity.

The Olympics certainly brought life to Vancouver and Whistler.

Besides that, the Heras' purchased a company called Pasco Seafoods in 2013. This was a major expansion opportunity and 7Seas nearly double in total revenue.

We embarked on introducing a new ERP system in 2011 to help with further growth. ERPs are no joke (if you know, then you know!), but it has been well worth the investment.

This decade is characterized by figuring out what we do, and doing it best. We are local purveyors of fine fresh and frozen seafood. We are importers. We are knowledgeable about how to buy, hold, maintain, and sell seafood. We take care of our inventory through the best methods available. We care for our clients who trust us to deliver, and come back time and time again.

We have waxed and waned with the market and the industry. Through the cycles of the sockeye salmon 4 year cycle, the good years, the bad years, and everything in-between. We have grown, changed and prospered, but we remain a family-owned and operated Canadian business committed to providing great, sustainable seafood to each and every customer. In fact, John and his sons still run the business to this very day with the same level of passion with which it was started.